Quarterly meetup with ShapeShift with over 140 attendees 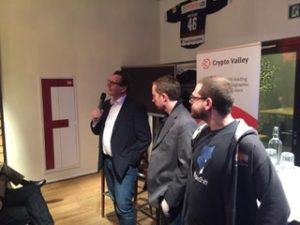 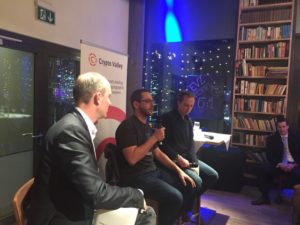 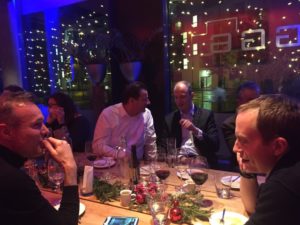 Along with the highly successful Crypto Valley Forum and its first Tuesday Meetups, the CVA has introduced a CVA-sponsored Quarterly “Special Event” series intended to showcase important blockchain companies and leaders in our ecosystem.
The first one, which attracted more than 140 participants, was held on 11 December and featured ShapeShift. Founded in Switzerland in 2013, ShapeShift is the fastest and safest digital asset exchange in the world. On the platform users can directly exchange cryptocurrencies for each other without opening an account and without the exchange ever holding the customer’s funds.
The company was represented by CEO Erik Vorhees and COO Jon, and the fireside chat was moderated by Nicolas Brand, Partner at Lakestar, one of ShapeShift’s investors.
Vorhees is among the most-recognized serial Bitcoin advocates and entrepreneurs. He is the creator of SatoshiDice, which was responsible for most of the Bitcoin transactions in 2012 and 2013, and has been a featured guest on Bloomberg, Fox Business, CNBC, BBC Radio, The Peter Schiff Show, and created SatoshiDice
Booming model
During the discussion it became clear the ShapeShift business model has been very successful, both its cryptocurrency exchange and the company’s Prism product, which uses smart contract to construct a “platform upon which humans and machines can acquire exposure to portfolios of digital assets without trusting a counterparty.” As a result of growth the company said it would be expanding their office in Zug.
The chat also contained a very engaged discussion of the future of cryptocurrencies.
More here:
– ShapeShift https://shapeshift.io/#/coins
– Prism https://info.shapeshift.io/blog/2017/05/21/introducing-prism-worlds-first-trustless-portfolio-market-platform
Next Post